Last night I watched Food, Inc.
In the past two weeks I listened to Michael Pollan's Omnivore's Dilemma and In Defense of Food. About a month or so before that I watched Fast Food Nation. So, one would wonder if I haven't become a vegetarian or something. Nope, if G-d didn't want us to eat animals he wouldn't have made them so damned tasty.
The only problem I have in my thinking of food is in my reading of Leviticus. I like my sheep still baahing, but there is something about not eating blood. I'm ignoring that since I also eat bacon. Of course Leviticus has a bunch of other rules that I'm just going to tip-toe over.
Anyway, back to the food disturbing books and films.... I plan to watch King Corn a little later. Seeing the factory farm set up did bug me, but really got my goat was the stripping of people's first amendment rights with laws forbidding 'disparagement' of the cattle industry or chicken farming by individuals. And Monsanto's harassment of farmers forcing them to buy their seed and suing those who reuse their own seed just seemed like some form of evil I can't put into words. Makes me want to avoid all American soy products.
But what of my own eating? I cook a lot of my own food. I tend not to eat a lot of beef. I'm more of a chicken & lamb person. For certain cuts I will seek out Virginia lamb. Otherwise, I'm actually comfortable with Aussie or NZ imported lamb. Besides bacon, I don't eat a lot of pork. I eat a lot of chicken and that's where I need to change. I have been buying more non-medicated-non-hormonal chicken. I a going to try to move that to more local chicken. My eggs are from Maryland, bought at the locally owned bodega. My milk (when I don't buy a carton at work) is also local and organic. My rice is from Asia or California. I've been buying Gulf shrimp, forgoing asian farmed shrimp.
But the problem is when I eat out. Most of y'all know my tastes can be high end. I don't worry about their sources. But when I go down market, like Chipotle, I'll stick with my veggie burrito to stay safe.
Posted by Mari at 11:14 AM No comments:

Email ThisBlogThis!Share to TwitterShare to FacebookShare to Pinterest
Labels: food

My sister got some Meyer Lemon trees today, that I ordered from a nursery in Florida. The note I sent with the trees were "Don't Kill Them." Hopefully the Meyers will sit somewhere in the front yard, where there is sun. Hopefully. And in 2 years, I pray they have lemons. And send them to me.
Why?
Meyer lemons seem to be horribly expensive. I paid $6 per pound for them at Dean & Deluca. I spent a good two days searching for them all over the city before finding them in Georgetown. I like the Meyers. Not like the regular lemons. Unfortunately, internet options seem to involve $20-$40 in shipping. Money, I rather give to my sister. Oh, if the tree is fruitful, somebody could be paying a month's rent with citrus.
Posted by Mari at 8:58 PM No comments:

I hit this goal before, but fell off the wagon when I bought the Florida house. The goal was to have 4 months of living expenses. I had it then used it to buy the house and then took out a signature loan to pay for the repairs on it. Well I paid off that loan in less than a year, 8 months. In the past oh, 4 months my emergency fund has been yo-yoing up and down.
The pop-in renter helped throw some money in the coffers, but when he does leave I'm not going to seek a replacement. I need a break and I want the house to myself for a few months. Then I guess if someone doesn't hint to the future, I'll take on another short term roommate. Maybe. I make enough to not need a roommate to make ends meet. However, I do like the extra coupla thou a year 6 months of house sharing brings.
So now my current goal is to save up for the basement and rear of the house. I have a two year goal for that. The goal is to not take out a HELOC or a 2nd mortgage. But the back wall is the expensive part. The rear has a lot of structural issues... so does the basement.
I'm not seeing how I can save the desired amount even though I saved what I saved and paid off $7K in 8 months. But on another level I know I can do it, provided the dentist doesn't find any more of my damned teeth he wants to cap. F-ing caps at $900 a pop. Don't even get started with the gold vs not-gold cap price diffs.
Posted by Mari at 1:16 PM No comments:

Not something to be covered in a homily

Today and I gather tomorrow, the Catholic faithful in the diocese of Washington will go home with a three page letter from the Archbishop regarding the current scandal. I got such a letter. As I said its three pages, so I'm not going to repeat it. And the letter is pretty dense so, I'm not even going to try to summarize it. But I will say it is about child abuse and what the Church has done about it in the last ten years and some limitations.
Last week there seemed to be some odd expectation that the Pope was going to mention something about the sex scandal in the Easter Mass. Easter is all about Jesus. If half the world fell off the planet and Easter was the next Sunday, it might get a one sentence mention. Nor was such a thing mentioned at my own church for Easter vigil. Besides the homilies are very short, supposed to focus on the readings and the rest are pretty prescribed prayers. The RC mass is not like some other protestant church services where the pastor can go on and on and on about whatever topical subject happens to be his fancy. I couldn't tell you what today's homily was about because my mind wandered and by the time it wandered back the priest was done.
My own stance on this is not of any consequence. Right now my big negative of being Catholic is that the Help's church doesn't think I'm even Christian, which has caused some real problems for us. Also the RC Church doesn't have a monopoly on sexual misconduct, just a spotlight. When we all were Baptists my mother went to our pastor for help and guidance in dealing with her difficult marriage and he hit on her. We left that church for the one she attends to this day. The one where for a time the pastor was living in sin, after leaving his wife to shack up with another woman. Unlike the RC Church the congregation is supposed to boot the pastor, not some hierarchy, but sometimes, too many times they don't. But the Baptists are okay. The pastor that made overtures to my mom is retired and the adulterous pastor is supposed to be reconciling with his wife.
Posted by Mari at 9:05 PM No comments:

I was bopping around on the web and wandered on to this website that had some pretty cool Christian themed tee-shirts with some awesome ska8er type graphics with words like "Forgiven" or "Risen" or some reference to Christ's sacrifice interwoven in the graphics, which covered the whole shirt or were off center. But that was just for guys. Their women's shirts were more bleech... girly on the topics of grace, purity, Chasity, and how great Christ is. Oh come on! Now it totally could have been because the market and the Invisible Hand directed the sellers and creators to make pink sweet n' innocent girly-girl shirts, which sucks if you aren't part of that market.
Posted by Mari at 8:19 AM No comments: 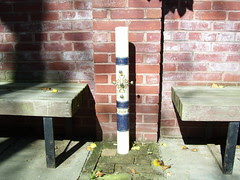 100_0245
Originally uploaded by In Shaw
My Easter I followd my own personal tradition of staying home. Of course, I did join the Help's landlords' family for their traditional gathering after church.
I did two Easter Vigils. My own church clocked in at 1 hour 44 minutes, St. Pauls' less than 3 hours.
The Lord is Risen!
Posted by Mari at 1:15 PM No comments:

I plan to attend 2 Easter vigils and continue my tradition of avoiding going to church on Easter and Christmas. Why? It's MY tradition. Yes, it didn't start with the best of intentions but I've been doing it so long it has gotten a life of its own. Easter Sunday I will be enjoying Our Lady of the Holy Comforter or St. Mattress. I may try out 1st Futon A.M.E.
Saturday, if last year is anything like the previous year, the vigil will be early and short. Father is very aware of the crime in the neighborhood and said if he had Easter Vigil at the regular time, nobody would show up. I felt badly for the folks whose car window was smashed (smash & grab?) on service..... Also last year, service came with a beggar hitting people up for money, twice. Yeah, this is happening in the daylight.
After that's over I intend to wander over to the Church of the Gay Lawyer for their most EXCELLENT Easter Vigil. I'll probably write them a check too and wind up on their friggin mailing list. I'll need to arrive as early as I can, so hopefully I can time it right. If the Catholic vigil goes longer or the metro system traps me then I'll head back home because the CotGL fills up quickly. One time I had to stand the entire time because I arrived too late.
Posted by Mari at 8:32 AM 2 comments: