Unfortunately work is slow and plodding and very uninspiring. It's just that I have a few things sitting on my desk that I've put off and ignored and there is no ignoring them. They must be done until something more interesting comes down the pike.
Anyway while that's going, I have almighty MP3 player and a few new sources of interesting lectures that almost make me miss college. Almost.
So far I am loving Seattle Pacific University. They have a bunch of old chapel lectures and speakers, as well class lectures. I've enjoyed the chapel speakers covering sex and cities (not those two subject together) from a Christian (with evangelistic notes) perspective. I've shared some the SPU and other lectures (from Reformed Theological Seminary) with the Help and sparked some discussion with him on related topics. The RTS lecture was on C.S. Lewis and the lecturer mentioned how in his old age he is comfortable with visiting the thoughts of Roman Catholic writers, but is secure in his Reformed outlook. The SPU lectures on sexuality, helped strengthen our resolve and appreciation for dialing way back the physical aspects of our relationship.
Unfortunately since the EcoTalk and Cato podcasts have had some dull (it happens) episodes I've had to get my libertarian economic ya yas somewhere else. The Mises Institute does have a lecture series that I've finished an enjoyed by Ralph Raico on the history of liberty. Now if only the Acton Institute would put a lecture series together of some of their stuff I'd be happy.
Goodness I'm spoiled.
Anyway, I keep looking for a class out there somewhere that covers Western historiography. I need a refresher. I've struggled with Open Univerity's German. I'll actually need to print out the related material, because mein Duetsch has gone to pot, and just listening isn't going to cut it.
Posted by Mari at 5:42 PM No comments:

Email ThisBlogThis!Share to TwitterShare to FacebookShare to Pinterest
Labels: AdultEducation, other thoughts, relationships 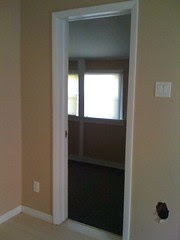 IMG_0373.JPG
Originally uploaded by In Shaw
I have been informed my Mom, who is my manager that the front bedroom that is Rosa's has been painted pink.

Now, I own the blasted thing and I'm the last to know. I guess I could search in the lease to see if there is any language about painting the walls. Even then, what can I do? Not like I'm going to kick her out for paint. Besides there is no return to the projects, the powers that be are supposed to tear it down sometime in the future.

For those who actually want to know.
I had told Jon that I was keeping my expectations low, as the Help admitted he didn't have a romantic bone in his body. Also the day before and day of I kept bugging, without response, the Help about what I should wear, because if we were going somewhere nice I wanted to dress the part. Day of, I find he hadn't reserved a table anywhere and just figured we'd go somewhere. *sigh. Because of the snow and the angry parking fights, I encouraged him to metro it over to my place.
He arrived a little late, 20 minutes past his ETA, which made me worried. When he did arrive he had in a plastic bag a pink teddy bear and a valentine's heart box. I eyed that with suspicion/ contempt. I am not a pink stuffed animal kind of girl. I was never a stuffed animal kind of girl. The box was a Russell Stover chocolate box, an inferior candy that I will eat if it's free and in the office and I don't feel like going out of the building for something better, like a Reeses Cup. And the box was falling apart.
I opened the box, no chocolate. Instead, the paper cups were filled with shallots and bubble gum. The kind of cheap .99 gum I love. I am addicted to bubble gum, especially the kind that gets hard quick and is nothing but sugar. The bear was just a container for brown rice. Yay. He knows me! He loves me!
Since my roommate was in and about and I really didn't have anything prepared we hopped on the metro to go back out to Maryland. We went to Tiffin, an Indian restaurant out in Langley Park that I used to go to when I worked and lived in Maryland. It wasn't full and we later stopped by the nearby former House of Spices (now some Halal market) to grab some black cardamon.
A good Valentines' Day.
Posted by Mari at 8:52 AM 2 comments:

Google made me cry

The ad is here, and like radio you develop the characters in your head, and the few sounds, the French gal's "hello" (or "halo?") and the cry of a baby just triggered something.
Posted by Mari at 9:17 AM No comments:

Email ThisBlogThis!Share to TwitterShare to FacebookShare to Pinterest
Labels: movies/tv

I'm from the South.
And please don't tell me that Florida isn't the South. Maybe South Florida, isn't but the rest of Florida is.
Anyway, a pleasant catch-up with an old friend was almost ruined by poo-pooing the South. The old friend had re-located down south and was talking about how different it was. But what began to irritate me in that narrative was the insinuation that the South had some monopoly on racism. It doesn't, it just was manifested differently and it is more blatent and in your face. Northern racism is more subtle, harder to pin down and is slimer than an eel in that it allows the Northern racist to claim innocence. Martin Luther King had the darnest problem with Chicago, and Detroit, L.A., and Boston (think bussing in the 70s) aren't necessarily racial utopias where equality flows. And just because the area where one grew up didn't have any black, or Native American, or brown Latinos around to bother discriminating against, does not make one better than the Southerner who is being judged.
I also felt the need to speak out against the other form of white superiority, where the brown, native or whatever person is given the signal that he or she or his or her people are too incompetent to do anything and must be saved, rescued, placed in permanent dependence by the White man. Energy by the hero white is spent to focus on the goodness of the white and the pitiful plight of the brown, rather than truely enpowering the brown enough to help his/her ownself. Pity rather than commpassion.
Posted by Mari at 12:09 PM 2 comments: