This small child tortured me... 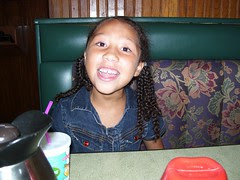 ...by making me watch Mickey's something or another of Dreams for the 2nd time in a heat island. Ah, what we do for love. And she got on my back so she could see because, well she's short. And that wasn't good for my back.
Of course I felt bad for the performers in Mickey's induction because polyester don't breathe and at least one fellow was wearing a wig. Most of the women were wearing wigs too. On top of that.... you gotta dance. Oh pity the serfs of the Magic Kingdom.
Posted by Mari at 5:17 PM No comments:

A certain someone asked that I not announce that he is getting married. Well to certain other people, so this will be vague but the three people who read this know who I'm talking about.
I expressed some concerns and fears I had about this change in life for him. Well, they we my concerns and fears, he'll be fine. I told him about another really good friend I had back in grad school. Long story short I lost my friend because of a perceived/accidental slight between me and his fiance. I didn't know her that well because she was in Worcester and we were in Amherst, so I there was lots of room for misunderstanding. I'm still sad about that loss. James, my friend, and I are slightly in the same profession but he's dropped off the face of the planet and I'd apologize for several days straight to his wife just to get my friend back.
So I told the soon to be married friend this tale and my worry. He calmed my fears saying what he and his future bride discussed about his friendships. Then later I'm hoping to plan to have them over for dinner and work around his bride's complex diet. Her complex diet and Roland's occasional fasts, if I can get them at the same table for the same meal, I will crown myself Queen of accommodating cooking.
Posted by Mari at 8:36 AM 2 comments:

The mystery of the divine

First, I know my puny little human mind is limited. And it is not going to make sense, because I'm trying to work it out.
With that
G-d is love. Love, a force that can go beyond the definition of space and time. Love, a huge powerful force that comes in all sorts of forms. Worse yet, it cannot be measured by science (if it can I want to know who mom loves more), nor can it be placed in controlled experiments. That might go with the mystery of it. You can't control it. In it's raw powerful forms it just plain f'ing scary.
The podcasts and readings by people of faith about Harry Potter, which seem to make it out to be a series of love (fraternal, paternal, etc) stories, the invocation of the Lion, the Witch and the Wardrobe and its themes of love, and other media I get that discuss G-d's life changing miricle inducing love, has got me thinking about it, in its various manifestations.
Going back to the G-d is love idea as a force of love, is just too mysterious. Some parts you can figure out, and some parts are beyond you and you just have to go with it. The problem with going with it is I have to give up some control. "Give it all up to the Lord" I'm told, but then I'm giving it up to this mysterious force that has a wonky timetable (patience they call it) and has its own agenda (his will be done).
Unlike plain old power, brute force, love gets ahold of your heart. Melts it. Makes you want to engage in time consuming acts of charity (form of love), forgive those who wouldn't respond in kind, and engage in other sacrifices. It makes herion addicts give up the smack, it makes martyrs, it changes minds. My problem is when you know what direction love is taking your heart and your logical/ analytical brain fights it because it makes no sense and it is time consuming.
I should note that occasionally my brain wants to sleep in all Sunday, and sometimes I think it has a point.
Once again I digress. So I pray. I am praying a (um I don't remember the exact wording) a special intercession or special 'i' something 'request' would be an easier term at the request of a co-worker. I say prayers of thanks and throw in my own requests to this mysterious force that cannot be bargained with and hope that His will won't bite me in the butt.
My brain is telling me I'm not making any sense and I should go to bed.
Posted by Mari at 9:29 PM No comments:

Looking for G-d in Harry Potter

I'm almost afraid to finish this book, "Looking for God in Harry Potter" by John Granger. First, I've only read one Harry Potter book, I know hard to believe, but fiction is not something I read. I used to read a lot of sci-fi fiction in high school and college, but once I hit grad school, no more. Second, I've seen most of the Harry Potter movies, but knowing how movies go, there is a lot that is left out. Granger's book mention things I cannot conjure up from my memory of the films, so it must have been left out.
In somethings I think Granger is stretching a little too far finding the symbols of Christ everywhere. The stag is Christ. The unicorn is Christ. The red lion is Christ. The centaur is Christ. That's a lot of Christs or symbols of the Christ running around. I could prove myself wrong when I re-read the books and say, "of course! The [random creature] is a symbol of Christ [doing something]."
I did hit something that made me finally whip out the pencil and write in the book (I do that, write in the margins). There is a scene where Harry observed Lord Voldemort drinking the blood of a unicorn the Dark Lord wounded (killed?). A centaur explained that "The blood of a unicorn will keep you alive, even if you are an inch from death, but at a terrible price. You have slain something pure and defenseless to save yourself, and you will have a half-life, a cursed life, from the moment the blood touches your lips." Granger then compares this to 1 Corinthians 11: 23-29 and thus highlights a portion for me that, I hate to say, seems new. That being

1 Corinthians 11:25-27 (New International Version):New International Version (NIV)
25In the same way, after supper he took the cup, saying, "This cup is the new covenant in my blood; do this, whenever you drink it, in remembrance of me." 26For whenever you eat this bread and drink this cup, you proclaim the Lord's death until he comes.
27Therefore, whoever eats the bread or drinks the cup of the Lord in an unworthy manner will be guilty of sinning against the body and blood of the Lord.

This now makes me a little hesitant to go to church today. The Eucharist is the main draw for me, the presence of his body and blood. And well. I know I'm not worthy. And seriously, this is my first time realizing there was a restriction on the communion. The whole 'unworthy manner' thing is news to me. I might have read it before but never gave it much thought.
Posted by Mari at 7:18 AM 1 comment: