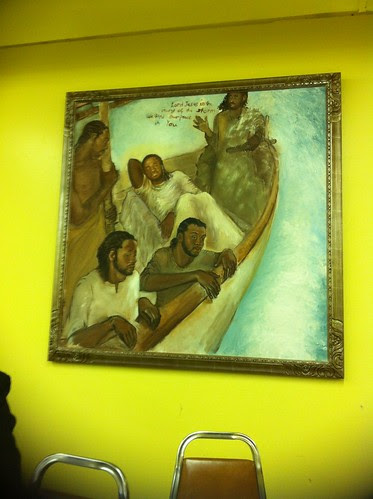 Jesus painting 1, a photo by In Shaw on Flickr.

A few years ago I helped my aunt photograph an event at a Baptist church basement with the ugliest black Jesus I have ever set eyes on.
For a funeral I attended another black Baptist church. I noticed in the sanctuary and in the basement several art pieces by the same artist. Much better than ugly Jesus mural. As you can see above the artist uses contemporary Afr.Amer. faces and hair styles to portray 1st century jews. He does faces quite well. Hands, not so much. The Help (my husband) remarked in this painting the artist tried to show the waves of water.
This was some of the best, non mass made, African American religious art that I've seen inside a black chruch. The best was in a college Catholic Church (more Latino than anything), in the vestible of the St. Augustine Catholic church in Gainesville, FL. The piece was of St. Augustine, though dark skinned had northern African features.
Anyway it is good when churches are a place to experience the arts, besides music.

Without getting detailed, I had a dream last night and I think it was about a problem I have a work. My conclusion is that I should take on the theology of a bumper sticker, to let go and let G-d.

The dream I was the best man (person) of a crafty-diy lesbian wedding at a British Anglican Church. The couple was busy being giddy and I, was not too thrilled with my position, but I had a job and I was going to do it. I had to make a decision about whether or not to buy a bottle of wine for twenty pounds (that's how I know I was in Britian, though no one had an English accent) or forty, knowing that I'd have to eat the cost. And there were other issues in order to get the whole thing going that the couple were too busy to answer. But I had a job and I do care about doing a good job.

Same thing at work. There is a project about something I did't care about and whenever it is done I'll forget all about. However the organization and cataloguing, I thought I found a good solution to, but my boss doesn't like it and thinks it looks too complicated. I think the other system proposed creates more complication down the road. My idea isn't getting much traction with the decision makers, so after tomorrow I'm letting go of my idea. Take it, reject it, whatever I'm done giving any emotional and mental energy to something I honestly don't care about. But I care about doing a good job. And I'll just do as directed, once direction comes forth.

Until then I'm going to do self-directed projects on stuff I do give a d@mned about.
Posted by Mari at 11:01 AM No comments: